The Breakfast Book by Marion Cunningham came out in 1987 and was an instant classic. Until recently though, I’d never seen the recipe for Zeppelin Pancakes (so-called because they are plump and airy), which Cunningham had learned from winemaker Don Chappellet. Both those names are icons of a former heyday of Bay Area cooking, but these are timeless, not to mention the best pancakes I’ve ever made. 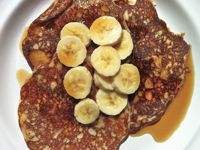 In a large bowl, whisk the egg yolks, buttermilk and sour cream or yogurt until well blended. Add the butter and stir just until mixed. Add the flour, baking soda, and 1/2 teaspoon salt and beat until smooth. In a separate bowl with an electric mixer or rotary beater, whip the egg whites with a pinch of salt until stiff but still moist. Gently fold the whites into the batter.

Heat a griddle or frying pan over medium-high heat and grease it with a little butter. Scoop about 1/4 cup of batter for each pancake onto the pan. Cook until little bubbles appear on top, then turn over and cook briefly on the other side. Serve immediately, topped with syrup and fruit to taste. (Some people even dollop more yogurt on top…but I won’t mention any names…)

note: per Cunningham,” this batter keeps well in the refrigerator for a few days; it will however lose some of its airiness, so just fold in another beaten egg white before cooking.”

"Tuesday Recipe" is shorthand for a simple, satisfying dish. It's also shorthand for my initials, TR. So subscribe for simple recipes sent to your email on (occasional) Tuesdays and feel free to search my archives for inspiration any time. Because the great thing about a Tuesday recipe is that it's just as delicious on a Wednesday (or Thursday, or...you get it). Thanks for stopping by!