With Memorial Day coming up, this is the week you will be bombarded with barbecue suggestions. Let me take a different tack: this is the week you should make a salsa like no other then use it on everything. It has no tomatoes and no cilantro. It is rich and thick and complex. It’s made with toasted dried chiles and tomatillos. It’s addicting.

I first ate the salsa on a trip to San Miguel de Allende. The cook at the house where I was staying made it fresh every day and it was waiting for us, with chips alongside, when we arrived late the first night. It was there the next day at breakfast to season our scrambled eggs. It was there at a cocktail party the next night to dip chicken flautas into. I couldn’t get enough of it so I asked Marisela to show me how she makes it. The next afternoon, she gathered her ingredients in the small blue-tiled kitchen and pointed to each one as she used it; when she got to the cumin seeds she said, poquito, poquito and took only 3 of them. I watched her toast the dried chiles in a comal (flat frying pan), turning with tongs for just a few minutes until they were almost chocolate brown. She ground everything in a molcajete, the beautiful granite mortar used in Mexico. She really put some muscle into it. Lacking muscles and a molcajete, I’ve adapted this recipe for the blender. I’ve served it with chips, eggs, tacos, enchiladas, and best of all, dribbled in a ribbon over quesadillas.

Marisela told me this was her mother’s recipe and she was both modest and proud about sharing it. All of this took place in my non-existent Spanish and her minimal English, but language didn’t matter, as it never seems to when it comes to sharing great recipes. They speak for themselves. 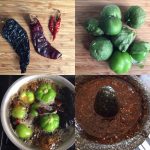 Pull the stems off the chiles then shake out and discard as many seeds from the insides as you can. Toast chiles in a dry skillet (don’t use nonstick) or on a griddle over medium-high heat until they are deeply browned but not burnt, 2 to 3 minutes. Remove from pan. Meanwhile bring a medium saucepan of water to a boil.

Remove husks from the tomatillos and discard. Place tomatillos and toasted chiles in the boiling water then reduce heat and simmer, covered, until tomatillos turn olive green and are soft when poked with a knife tip, about 7 minutes. With a slotted spoon, transfer the tomatillos and chiles to a blender or food processor and add the onion, garlic, cumin seeds, and a teaspoon of salt. Pulse with quick bursts until the salsa is barely pureed. Transfer to a bowl and let cool to room temperature.

Before serving, taste salsa and add more salt as needed to balance the tartness of the tomatillos. Store the salsa, covered, in the refrigerator for up to a week.

"Tuesday Recipe" is shorthand for a simple, satisfying dish. It also shares the initials of my name, TR. Subscribe for simple recipes sent to your email on (occasional) Tuesdays and feel free to search my archives for inspiration any time. Because the great thing about a Tuesday recipe is that it's just as delicious on a Wednesday (or Thursday, or...you get it). Thanks for stopping by!