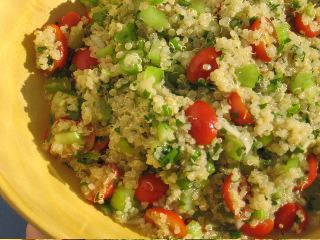 San Francisco had an attack of summer weather over the weekend and I say attack because it was a siege: the high temperatures descended and the masses emerged from their winter habitats in shorts, sandals, and very white legs and took over the city. I escaped to Stinson Beach for a swim and have a sunburn to prove it. Fortunately, I also got myself invited to lunch at my friends Loke and Annette’s house, where we had a quinoa salad made by Loke’s sister-in-law, Renee. It’s similar to tabbouleh and it’s extra-good for you because quinoa is full of protein and fiber. And most importantly, it tastes like summer even if you live where spring has barely sprung.

To cook quinoa, bring 1-1/2 cups water to a rolling boil in a medium pot, add 1/2 tsp salt, and quinoa. Let it return to the boil, then reduce heat, cover, and simmer until tender and a little spiral of white unfurls from each grain, 15 to 20 minutes. Spread the cooked quinoa on a baking sheet to cool.

While quinoa is cooling, finely dice the celery and put it in a large bowl. Thinly slice the green onions, using both white and green parts, and add to celery. Finely chop the parsley, discarding stems. Cut each cherry tomato in half. Add parsley, tomatoes, and capers to bow with celery. In a measuring cup, whisk the vinegar and mustard together with a fork. Whisk in the olive oil. Pour this over the ingredients in bowl and let stand until quinoa is cool.

Add cooled quinoa to the bowl of vegetables, then grate the zest of the lemon directly into the bowl. Squeeze juice from half the lemon over all. Stir everything well and season with salt and pepper; taste and add more lemon juice and salt if desired. Serve, or chill up to 1 day.

"Tuesday Recipe" is shorthand for a simple, satisfying dish. It also shares the initials of my name, TR. Subscribe for simple recipes sent to your email on (occasional) Tuesdays and feel free to search my archives for inspiration any time. Because the great thing about a Tuesday recipe is that it's just as delicious on a Wednesday (or Thursday, or...you get it). Thanks for stopping by!